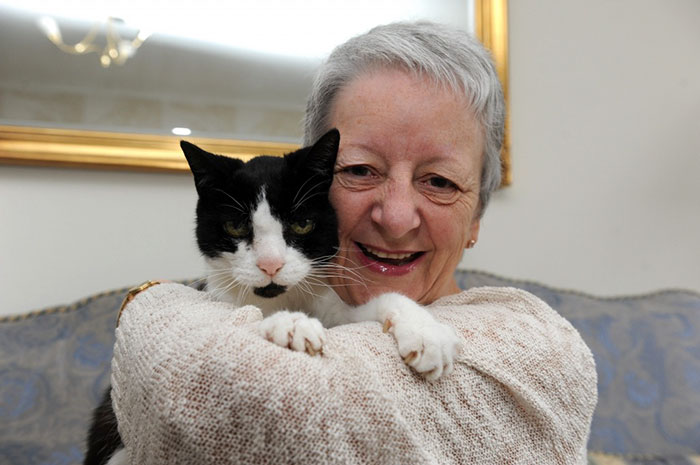 For 12 years, Piron the cat has been living with Jane, an 83-year-old single Englishwoman. The woman found the pet in a shelter when he was a little over two months old.

Jane has always loved animals, when her beloved cat passed away due to her advanced age, she decided to give the house to another animal and took Piron from the shelter. The kitten was the fifth in the litter and was born very weak, the woman spent a lot of time and effort to cure and feed him.

The cat got stronger and grew up, became beautiful and fluffy. Piron’s character turned out to be kind and affectionate, he accompanied his mistress everywhere and most of all loved to climb into her arms.

There was real contact between Piron and his mistress, and one incident showed that the strength of this connection is very great.

Jane often went for walks in the forest and took the cat with her. During one of these walks, she did not see the bumps under her feet and fell into a ravine.

The cat didn’t leave his mistress in trouble, he remained nearby and meowed loudly. Thanks to the cry of the cat, the rescuers were able to find the woman and help her. Piron became a hero, but he no longer expected in his honor, but the day when Jane was released from the hospital.