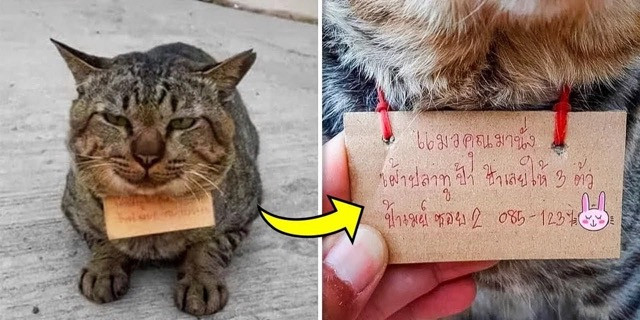 The owner of the cat felt sincere love for him, took care of him and spoiled him, but the cat still preferred to walk by itself. After one of the escapes, the owner searched for the cat for a long time, but the cat caught a trace.

A few days later, the cat came by itself, while he had a new collar on and a note hung on the collar.

The note turned out to be an IOU, which said that the cat had been sitting in the store for a long time and was looking at the fish. The owner of the store, Aunt May, fed the cat fish, and wrote down the bill for it in the name of the owner of the animal. The woman’s phone number was also attached to the bill.

This story quickly went viral on social media. Many wrote that the cat looks pleased with himself and does not repent of what he has done. We don’t know if the owner of the animal paid for the fish or ignored the request of Aunt May, but many advised the owner of the cat to put an inscription on the collar so that the cat would not be fed, because he didn’t know what the animal would decide to treat himself to during the next escape.