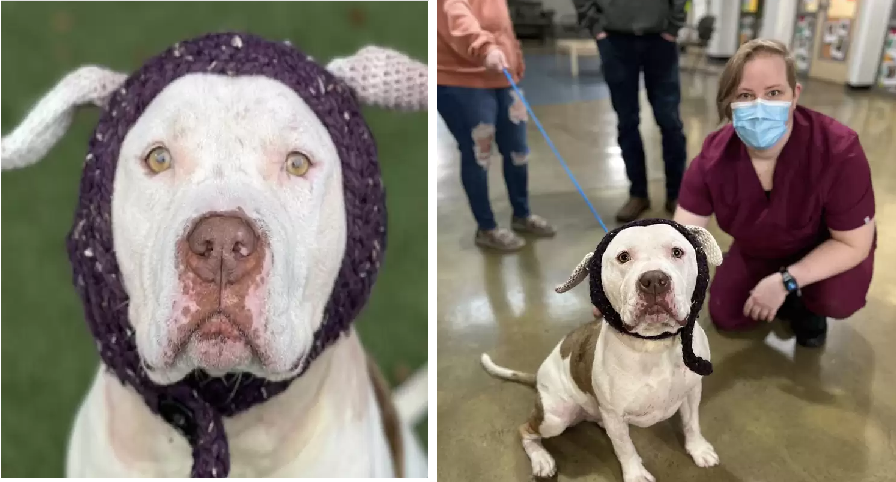 Meet Willy Wonka — a bubbly 2-year-old pit bull whose world changed when an unfortunate accident caused him to lose his ears. 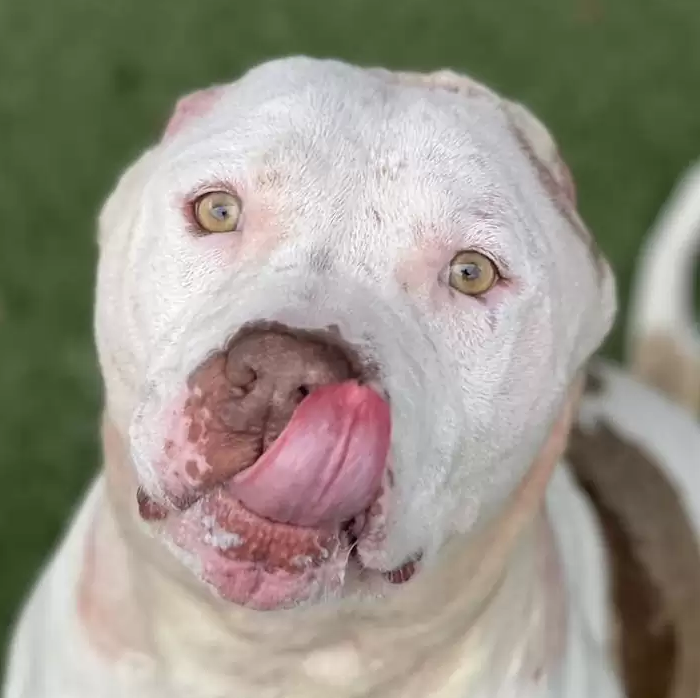 After two extensive trips to the vet, Willy’s dad could no longer pay for his treatment, so he surrendered the pup to the SPCA in hopes of getting him the care that he needed.

By the time Willy got to the SPCA, he needed extensive care to get him healthy again.

“We spent the next few weeks cleaning the area, replacing sutures and staples, and replacing bandages every day,” Varanini said. “Despite the obviously painful injuries and traumatic events prior to his arrival, he remained ever-trusting of the shelter staff, and was an excellent patient.”

Willy had a long road of recovery ahead of him, but his pain didn’t get in the way of his heart — the pup fell head-over-heels for the shelter staff and they felt the same about him.

“The shelter medicine team at the SPCA was just in love with him,” Varanini said. “Which led to the creation of the ears …”

John was afraid that Willy’s lack of ear flaps could cause adopters to think he was scary or unapproachable, so the compassionate vet tech came up with a plan — they would crochet a pair of replacement ears for the pup. 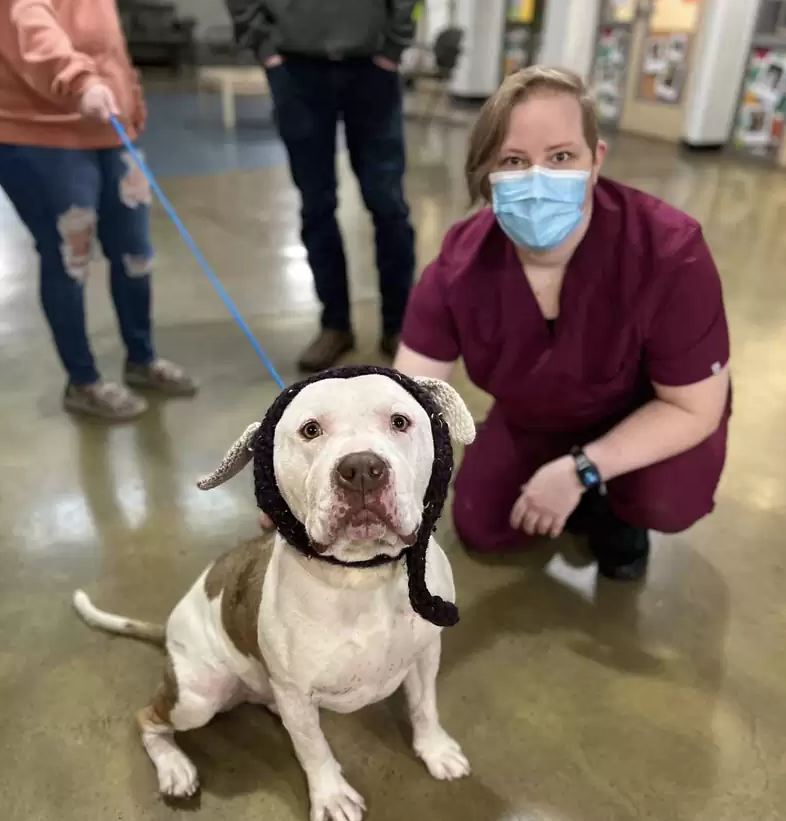 “According to John, they had just the right yarn colors at home: white and pink to match Willy’s fur,” Varanini said. “They were able to ‘whip up’ the ears in only one evening.”

The next day, John came back to the shelter and placed the ears on Willy’s head.

“At first, Willy was confused about the strange thing we were trying to put on his head,” Varanini said. “But once he realized he got lots of treats when the hat was on, he was much more accepting of our photo shoot!”

The staff took pictures of Willy with his crocheted ears on and uploaded them to their social media pages. 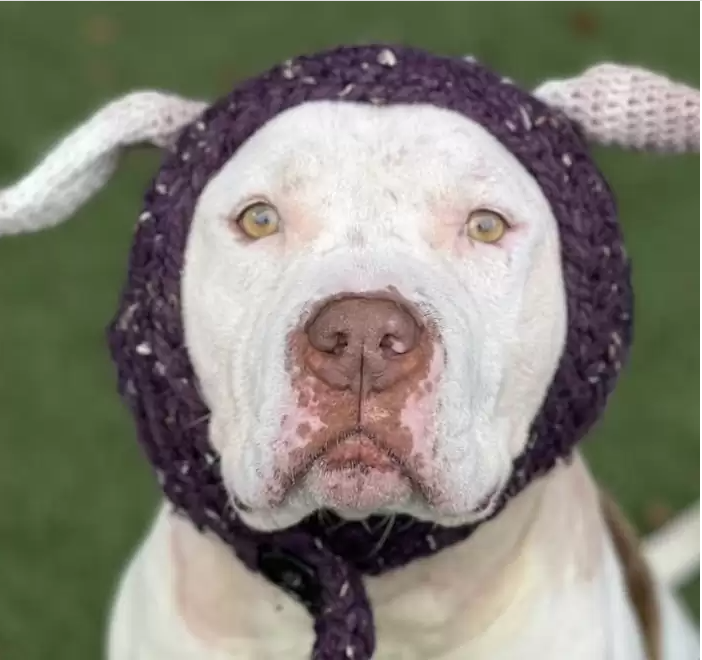 As they’d hoped, Willy’s crocheted ears garnered a lot of attention. Before long, the dog was adopted into a loving forever home.

Willy has changed a lot physically since his first days at the SPCA, now that he’s fully recovered, but one thing’s stayed the same: his personality.

“Willy is just as lovely now as when he arrived,” Varanini said. “He’s a playful, giant marshmallow man and a cuddler extraordinaire.”

The staff at Sacramento SPCA miss seeing Willy every day, but they’re so happy that he has a home now. 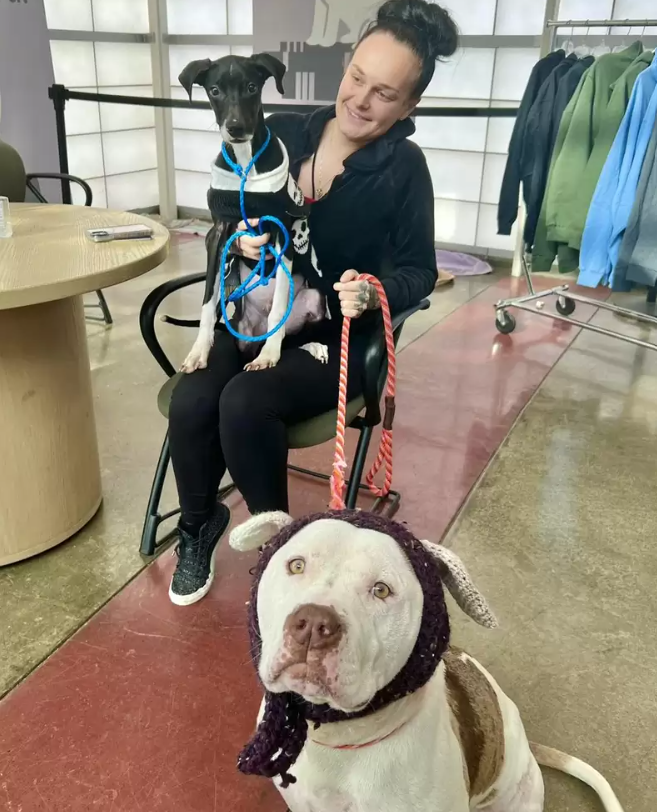 “He’s doing so well,” Varanini said. “Willy has already claimed his spot on the couch and is showing his new puppy brother, Zeus, the ropes. He’s also meeting cats for the first time!”

And while he no longer needs his crocheted ears to find a home, Willy’s previous caregivers hope his custom ears continue to bring him comfort and remind him of the lifelong friendships he made at Sacramento SCPA.

To help animals like Willy Wonka get the care they need, make a donation to Sacramento SPCA.