Animals that live on the street often end up in shelters. For some time, shelter staff try to find owners for them, but if these attempts do not lead to success, over time, the animals have to be euthanized. Julie, a stray dog who was picked up along with her puppy, also ended up at the shelter. The dog was very frightened, but she tried with all her might to protect her puppy. 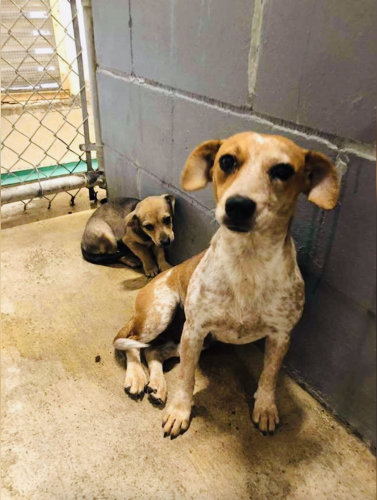 Julie and her baby were lucky.In the shelter they met a man who couldn’t remain indifferent to their fate and decided to help. The animals were under a lot of stress at the shelter. Julibo was afraid of people and loud sounds, it was unusual for her to be surrounded by a large number of animals, but each time she forgot about her own fear and stood up for her baby. Mom literally covered the child with herself, stepping forward, even if she herself was shaking with fear at that moment.

Alla stumbled upon the photo of Julie quite by accident, noticing her on social networks. The girl’s family already has several pets, whom they saved from a wandering life.

In addition, the shelter in which Julie found herself with a baby was very far from their home. Alla discussed the situation with her husband and together they decided that the distance wouldn’t be an obstacle in order to help the unfortunate animals.

The family adopted the dogs from the shelter, saving them from euthanasia. 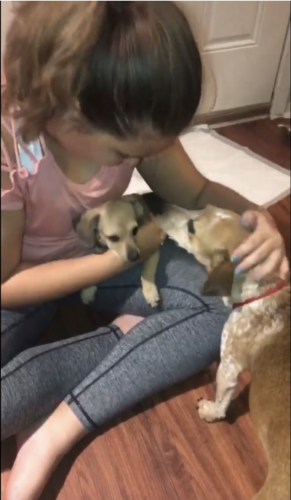 The baby was named Tobik, he turned out to be very sociable and quickly found a common language with other family pets. Tobik got used to it in a matter of days and began to participate in games with other dogs. Julie’s adaptation process is worse, she is still getting used to a new place and environment, avoiding people, and most importantly,he doesn’t take her eyes off her baby, as if afraid to miss the moment when he needs protection.

Julie almost doesn’t leave Tobik, controlling everything he does. Even when the owners take the baby in their arms, the mother immediately appears nearby and checks whether they will offend him. The family hopes that care and love will affect Julie and, over time, she will begin to fully trust them.