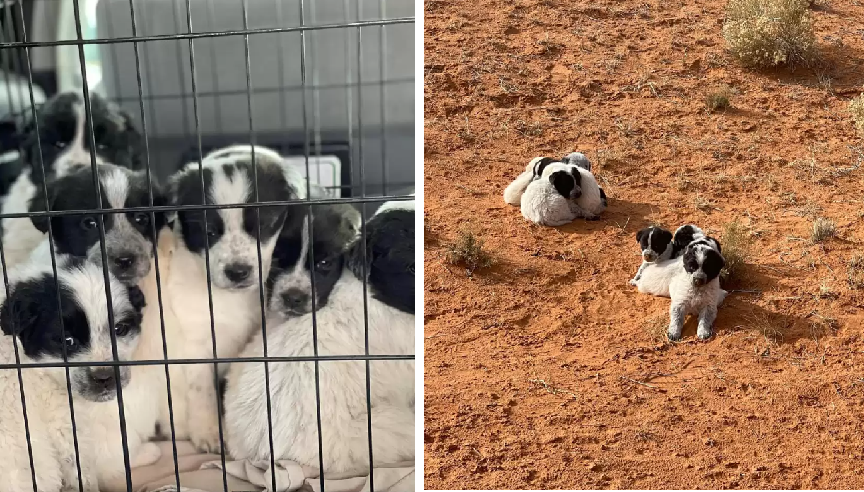 Hanna Wilson wasn’t planning on saving a life when she got in the car with her teenage son one January afternoon — it was just a normal day for her and her family in Rock Point, Arizona. But as soon as she saw two mounds of black and white fluff lying in the middle of a busy dirt road, the Good Samaritan had an immediate change of plans.

Wilson pulled over near the piles of fur to get a closer look and, to her surprise, counted eight young puppies huddled together with no other family in sight.

The road was flowing with traffic, and each car seemed to narrowly miss the pups, so Wilson jumped right into action to save them.

First, she reached out to a rescue organization she knew she could count on for help with picking them up.

“We got a message on Facebook that said, ‘Help! Help! Someone dumped eight puppies on a dirt road in Rock Point, Arizona,’” Shelby Davis, director of Soul Dog Rescue, told The Dodo. “I stopped everything to go find them.” 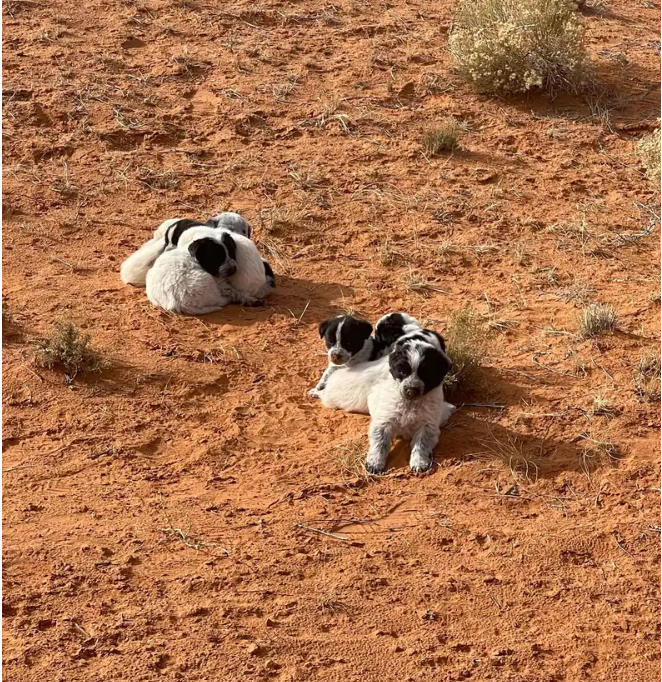 Davis started her hour-long drive to Rock Point, but she got another urgent message from Wilson before she got there.

“There were 13 puppies, not eight,” Davis said. “There were more hiding.”

With Davis being far away and traffic worsening on the dirt road, Wilson and her son decided to rescue as many puppies as they could, as quickly as possible, all on their own.

“Her son ran after all of them, and she got them all in a crate,” Davis said. “Then, they waited for us patiently.” 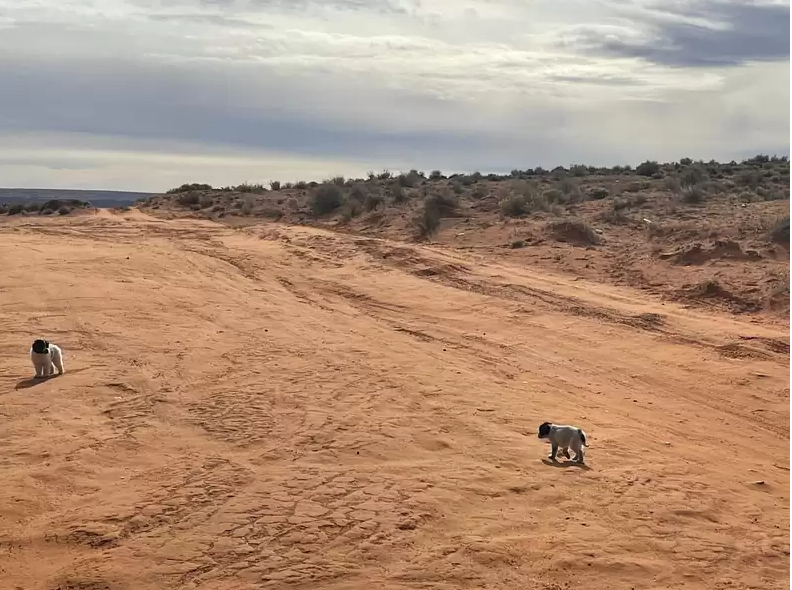 When Davis got there, she helped transfer the puppies into her rescue’s vehicle. She was grateful to Wilson for not ignoring the pups even though others had, noting that everyday citizens like Wilson can make a huge difference when it comes to saving animals.

“There’s a lot more people in the community doing rescues and not turning a blind eye,” Davis said. “Things are starting to change for the better.”

When Davis got in her truck with the pups and started driving away, she immediately got a glimpse into their exuberant personalities.

“A couple of them would have full-on conversations with me,” Davis said. “They’d be really good and quiet until I looked at them, and then it’d be time to talk and give me a piece of their mind.” 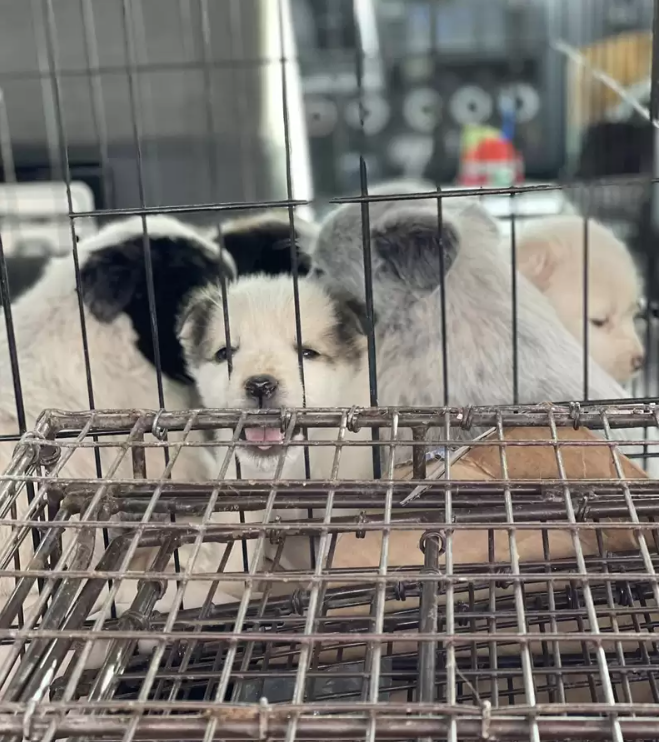 The puppies were given full medical exams as soon as they got to the vet, along with food and water. Luckily, they were big enough to eat wet food on their own, which would help them recover faster, but they were desperately hungry and thirsty.

“I’ve never seen puppies drink as much as they did,” Davis said. “It seemed like they’d been out for a while.”

It’s unclear how much time the puppies actually spent out there, but with temperatures dropping to 15 degrees Fahrenheit in the evenings, Davis is sure that they wouldn’t have been able to survive one more night.

Not only were they saved just in time, but each puppy had a cozy foster home to fall asleep in on the very same day of their rescue. 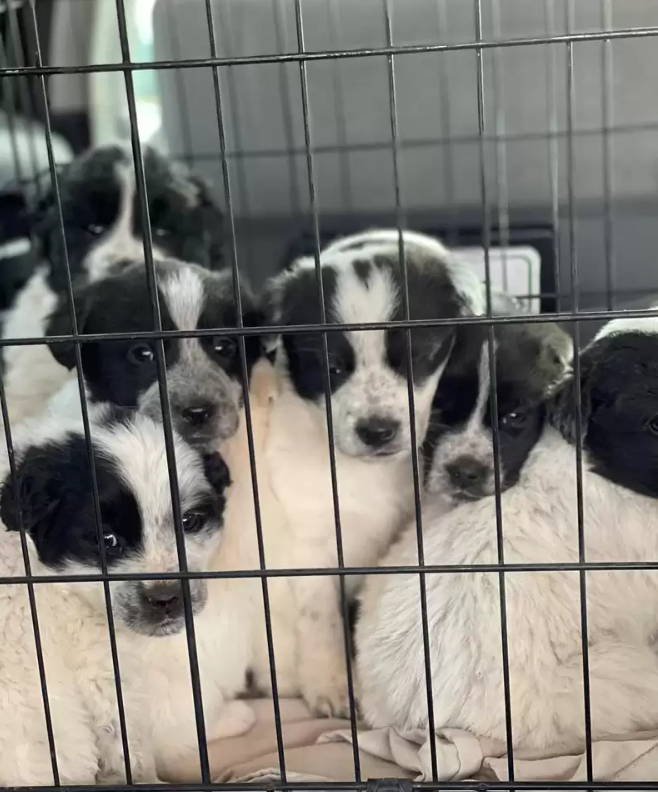 “None of them had to come into the shelter, which is always best for them,” Davis said. “With their fosters, they were getting their needs looked after 24/7.”

You can read more about their rescue here:

The puppies are currently still with their foster families, but they’re not alone. Since the puppies were only 4-5 weeks old when they were rescued, four of them went to one foster home together, and the rest of the litter went out in pairs of two.

The tiny litter will be officially available for adoption through Soul Dog Rescue in about a month and a half, after they are fully vaccinated and spayed or neutered. Until then, the pups are growing more each day and loving the new lives they have with their current families.

“They’re ridiculously cute and brave,” Davis said. “I know they’ll all grow up to be amazing dogs.”