In the Japanese city of Osaka, there is a cafe that is very different from other city food outlets. The owner of the establishment picks up homeless animals on the street, treats them, and then finds a new home for them. That’s how an owl named Fuku ended up here. The owl got used to her new home, she walked in the garden of the establishment and was not at all afraid of the guests. 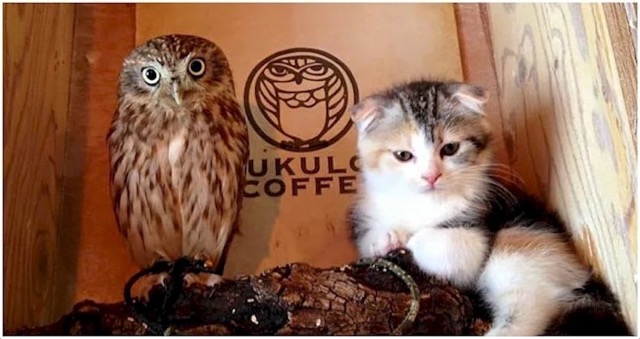 Kitten Marimo appeared a little later. Sympathy immediately arose between the cat and the bird, although in nature representatives of these species are more likely enemies than friends. This couple has become a confirmation that there are exceptions to every rule.

According to the cafe owner, Marimo and Fuku hit it off right away. A few minutes had passed since they met, and the cat and the owl were already sitting side by side, closely clinging to each other. Marimo and Fuku became inseparable and have always done everything together ever since. Despite a lot of differences, this couple has an amazing similarity of characters.

The owl and the cat often sit together in the garden, admiring the scenery, while they are so closely pressed against each other that it seems they become one.

Friends also have differences, for example, an owl and a cat have different daily routines. Marimo prefers to sleep at night, while the owl stays awake at night. At night, Fuku looks at his sleeping friend with bewilderment and even slight condemnation, but does not dare to wake him up. Despite its small size, it is the owl in this couple that is the main one, because it has a more strict character. 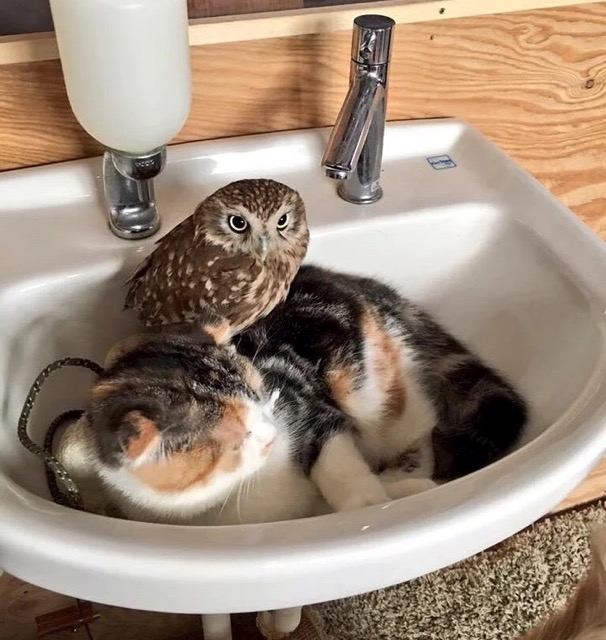 All pets that used to live in a cafe sooner or later found a new home and family for themselves. The owner of the establishment cannot yet say with certainty that the same fate awaits Marimo and Fuku. The man decided that his wards should stay together and if he fails to find a family that will take both the cat and the bird, they will continue to live in his cafe.